Located approximately 38 km south of Bab edh-Dhra’, the site of Feifa contains a small Iron Age fortified village partly overlying a very large EB IA cemetery. In the last few decades, Feifa has been the focus of intensive looting, with an estimated loss of thousands of EB IA cist tombs. 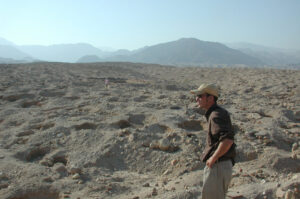 Fourteen tombs were excavated during test excavations in winter 1989-1990. All excavated tombs were cist tombs, with stone-lined walls (either slab-built or cobble-built walls), and large slabs used as roof coverings. Most tombs contained multiple burials, ranging from 1 to 6 individuals per excavated tomb. The density of tombs in this cemetery is striking, with an average of 6 tombs in 50 square meter area.

Archaeologist Jamie Fraser in 2004 at area of 2001 salvage excavations conducted by the Dept. of Antiquities of Jordan

At the time of writing, the vast majority of tombs have been robbed out, and in 2001 the Department of Antiquities led a salvage operation at the site (as well as at Naqa) under the direction of Dr. Mohammed Najjar (Najjar, personal communication, 2001). Interestingly, in excavating these tombs, the team encountered a heavy ashy occupational level with Neolithic pottery. In the walled town area, test excavations revealed a substantial 2 m wide wall with plastered faces, and all occupational levels and structures were clearly associated with Iron Age ceramics.

Publication and analysis of Fifa excavations (both by the EDSP and by the Dept of Antiquities) will follow behind the publication of the Numeira volume. In 2011 the Follow the Pots Project team mapped the extent of the site and groundtruthed sample areas. Currently the team is monitoring the continued looting of the site, and conducting ethnographic interviews to learn more about how and why people loot the site, and where, how, and why they are bought and sold through a variety of different distribution pathways.