NB: The final report on Numayra and Ras an-Numayra, a 2-volume monograph to be published by Eisenbrauns/Pennsylvania State University Press, is under production with the publisher. PSU Press has indicated that we should expect an April 2020 publication date.

The EB IB site of Ras an-Numayra is located 400 meters to the east of the walled town of Numayra. The excavations at Ras an-Numayra were undertaken in the 1983 season under the supervision of (now) Dr. Gillian Bentley under the direction of Dr. Michael Coogan. The site is dominated by the remains of a large stone wall running approximately 15 meters along the crest of the site. The pottery assemblage compares well with the EB IB material from Bab adh-Dhra’. At the eastern end of the wall, a 3 x 10 m unit was opened to expose space on both sides of the wall. In this unit, excavators found evidence for multiple flooring episodes, a smaller wall parallel to the large wall, and a few features characteristic of residential spaces of the time, including a hearth, a pit, and a mortar. Results of test excavations at Ras an-Numayra will be published in a chapter in the larger Numayra volume. 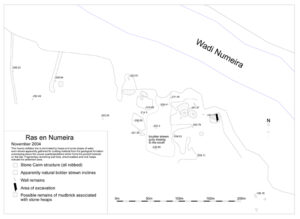 The site can be accessed by traveling approximately 400 meters to the east of Numayra’s eastern fortification tower, uphill and through a large natural sandstone formation. The site has suffered extensively from erosion and downcutting of the Wadi Numayra, and very little survives of the EB IB remains beyond the large wall that runs roughly SW – NE across the site. The large EB IB wall dominates the eastern portion of the site, and people have reused the site through time by building cairns (see photo and profile of Cairn A below) and temporary windbreaks and shelters (presumably built by shepherds). 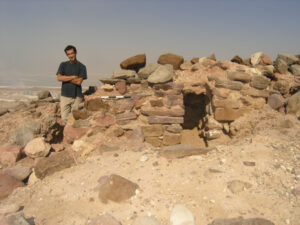 Cairn A southern face, with archaeologist Jamie Fraser for scale 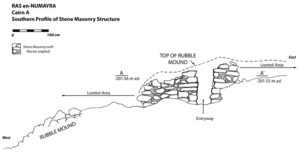 Profile of Cairn A at Ras en-Numayra 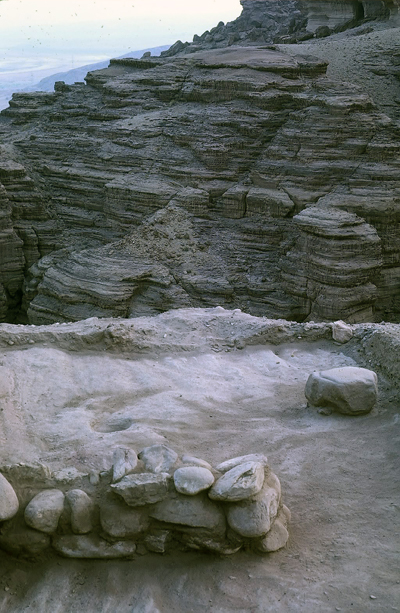 View Northwest of Unit P1, with cliff edge in the center of the photograph

As is evident from the profile recorded in Unit P3 (see figure below), this space was renovated with multiple refloorings several times during the EB IB. The large wall, approximately 1.5 m in width and running for approximately 15 meters in length, showed evidence of plastering on both faces. 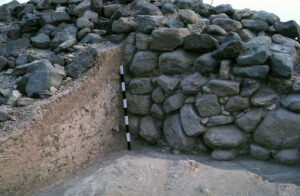 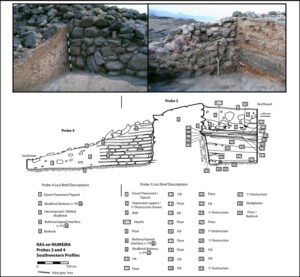 The majority of the artifacts associated with these spaces were pottery vessel fragments, and they were primarily storage and residential in nature. One hearth was found in Unit P2 and a cuphole was found in Unit P1. With only 30 square meters excavated it is difficult to understand the full scope of activities that people might have carried out at this site, but it does seem to be residential in nature. 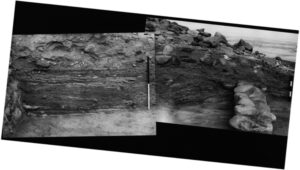 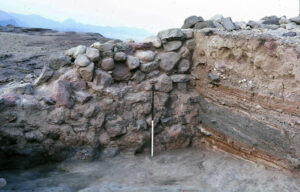